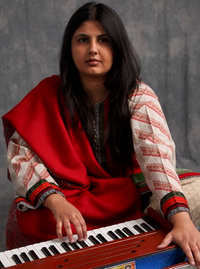 For many centuries, Muslim mystics following the spiritual dimension of Islam called the tasawwuf have extended the message of love, religious tolerance, and harmony within diverse groups in their settings alongside promoting equity and inclusion. In this workshop, we will learn about these Sufi expressions in sound and movement from Egypt, Turkey, to Pakistan and India with hands-on learning to sing a Sufi poem from the South Asian tradition of qawwali, called Chap Tilak by the poet Amir Khusrow in a South Asian melodic mode from the North, called Raag Aiman. As a result of this workshop, you will have deeper insights into the Sufi spiritual tradition and the ways in which it empowers and brings hope to diverse cultures.

Perils of Heavy Rainfall, an acousmatic composition on floods in Pakistan in 2020, was awarded Second Prize in Listening During COVID contest (2020) by the Canadian Association of Sound Ecology (CASE) and accepted for publication in the Goose, Journal of Environment, Arts, & Culture, Canada (Fall, 2022).

Shumaila Hemani, Ph.D. in Music and M.A. in Ethnomusicology from the University of Alberta, is the former Music Faculty for Semester at Sea (SAS) Spring 2020 Voyage. Her research on Sufi sounds of the Shah jo Raag, mentored by Prof. Regula Burckhardt Qureshi, is situated at the intersection of religion, governance, and social justice at the Muslim shrines in Sindh, Pakistan. Hemani has disseminated her research at many peer-reviewed conferences in Canada, the US, and internationally. She has received several awards, honours, and recognition for her academic and artistic contributions, including First Prize at the Society for Ethnomusicology Conference (2017), the Cultural Diversity Award (2015) Laura Bassi Scholarship (2018 and 2021), the State of Kuwait Award in Islamic Studies (2015), Frank Henderson Prize in the study of Women and Religion (2017), Maud Karpeles International travel award (2015), the Institute of Ismaili Studies graduate and doctoral award (2006-09/2012-17), and many others. She has published about Pakistani women's music in a historical context in the Women and Islamic Cultures (Brill, 2017) and contributed the first report about Pakistan's music to the International Council of Traditional Music (ICTM) (2021). She has also published in the Conversation, Canadian National Post, Work of Arts, and other media. Her research monograph on Sufi performers in South Asia will be published by Routledge’s Islam and Human Rights series in 2022.

“Hemani’s piece struck a nerve in me for its paradoxical robustness, its vocal virtuosity, the harmonic texture contained in her solo line, and the sense of working out an inner grief by building emotional power and inexorable drive right up to the final note. It ended the first half with a bang and hardly a whimper.” - Stephan Bonfield

Ph.D. in Music, University of Alberta

Shumaila Hemani is an Ethnomusicologist with expertise in sounds of religion. Her research and performance practice in singing Shah Latif's sung poetry, Shah jo Raag has received many honors and awards: the First Prize at the Society for Ethnomusicology Conference (2017), State of Kuwait Award in Islamic Studies, Frank Henderson Prize in the study of Women and Religion, and Cultural Diversity Award, Edmonton Arts Council (2015) to name a few. Studying with two master musicians in Pakistan, Ustad Hameed Ali Khan Sahib from the Gwalior Gharana in Sindh, and Faqir Jumman Shah from the shrine of the Sufi mystic: Shah Abdul Latif Bhitai, Hemani has presented Sufi poetry internationally. Her two compositions: Sarang: Perils of Heavy Rainfall and Supplication, were premiered at the SEM, 2020. Her songs Living with Purpose and Anticipating have been in the Top 10 within Ethnocloud's World Music Charts. She has performed at the World Odyssey (2020), Canada's Music Incubator (2019), Femme Wave Festival (2019), the University of Alberta (2016), and the Banff Arts Centre (2015), Pakistan American Cultural Centre, to name a few.